Many will have come across the Father and Son duo Simon McDermott (OB 87-94) and his Dad Ted, the ‘Songaminute Man’, on social media over the Summer. Through sharing ‘Carpool Karaoke’ style videos, former pupil Simon has raised a fantastic £130,000 for the Alzheimer’s Society.

Simon’s Dad was diagnosed with dementia in 2013.  He’d been a singer throughout his life and is known as The Songaminute Man because of the vast number of songs he knows.  In 2016 Simon started creating Carpool Karaoke style videos of himself and his Father and uploading them to social media to raise awareness of the condition and also funds for the Alzheimer’s Society and, in only a few weeks, they had raise a staggering £130,000.  The videos continued and they received a Pride of Britain award and the JustGiving Creative Fundraiser of the Year award for their efforts.

The Carpool Karaoke videos are guaranteed to make you smile and Simon continues to create new ones but the fundraising has now also taken a new direction with Ted having recently recorded a big band charity album with the world famous Guy Barker Orchestra and Simon has just written a book about his Father’s life and their journey with dementia entitled ‘The Songaminute Man – How music brought my Father home again’.

If you’d like to show your support for Ted and Simon and help raise more funds for this worthy cause, the album and book can be purchased from Amazon, most bookshops or direct from their website www.songaminuteman.com 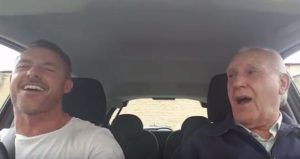