Click here for the latest information about how we’re protecting our community from Coronavirus (COVID-19)
Our Ofsted rated ‘GOOD’ Sixth Form is accepting applications. Apply now!
Click here to keep up to date with the latest school news and events.

Over the past 12 weeks, the 8 shortlisted Carnegie book titles have been thoroughly enjoyed when our Year 8 shadowing group became Carnegie judges, scrutinizing the work produced both by authors and illustrators.

Our pupils threw themselves into the award process and I hope have emerged with a much wider knowledge of how book authors and illustrators can and do produce, some outstanding work. The prestigious Carnegie/Kate Greenaway book awards remain popular here at Queen Elizabeth’s Grammar School, rekindling a thirst and passion for reading year after year.

The Carnegie shadowing group had the chance to read, discuss, debate and finally, after much more discussion, this time very much debated ones, they chose their favourite book – to join hundreds of other schools nationally also taking part, casting their votes and adding book reviews to the Carnegie/Kate Greenaway website.

Many thanks to former student Suha Mehmood, who once again contributed to the book reviews by adding her very own book illustration.

The 12 weeks flew by and it was soon time to invite the group to watch the live coverage of the finals – giving pupils a very real experience of a book award. With much trepidation, the group waited patiently to hear the exciting news during the round-up of the finals. With a drum roll, party nibbles, treat bags, books and much more, the pupils joined in with the celebrations and much fun was had by all. The pupils involved also received a certificate for their contribution to the book award.

Due to Covid-19 precautions, our usual Kate Greenaway book awards were sadly not able to run, but pupils in Year 5 will receive a video recording of the books shortlisted, which will include short extracts from the books being read by Mrs Dewhurst and the Carnegie Year 8 shadowing group.

These are without a doubt extremely worthwhile and prestigious book awards to shadow, especially as they are the oldest and most loved children’s book awards.

Congratulations to the winners of both book awards for 2021

Kate Greenaway: Small in the City by Sydney Smith

A very well done to our Year 8 shadowing group who deserve much recognition for their hard work and dedication to the book awards. We are already looking forward to, and preparing for, the 2022 awards! 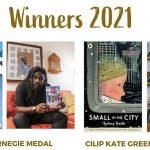 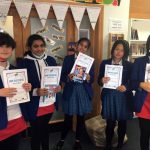 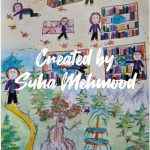 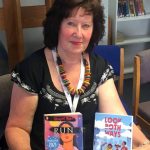