Can You Help Solve the Mystery of the Silver Medallion?

This silver medallion from 1961/1962 was donated to school by Mary Naylor, Philip Johnston and the family of John Law deceased in 2016.  A number of attempts have been made to discover its purpose but they have proved unsuccessful and, as such, we are hoping that you, our wider QEGS family, might be able to shed some light on the matter.

The medallion is 50mm in diameter and 5mm thick.  The hallmarks are:

An Anchor – representing the city of Birmingham

A Lion – the Standard Mark for silver

The letter M – which denotes the year that the medallion was made.  M is used for the dates between July 1961 and June 1962.

The medallion appears to be in honour of the school itself as the translation of the Latin inscription is “The Seal of the Free Grammar School of Queen Elizabeth, Blackburn”.

If anyone has any information which might help us identify the medallion and its proposed use, we’d love to hear from you.  Please email Taania Duckworth at tduckworth@qegsblackburn.com 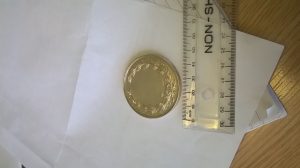