Alan Turing is a man who today is best known for his intellectual genius and as ‘father of the modern computer’; and yet, on 21st and 22nd November, the QEGS community was treated to an exceptional performance of Hugh Whitemore’s ‘Breaking the Code’, which brought Turing’s humanity and vulnerability to memorable theatrical life.

Ben Ventress’ production promised the audience an ‘emotional and intellectual journey’ and it did not disappoint. This was an absolute tour de force from the small but exceptionally able cast.

It is rare to find a school production as thought-provoking and engaging as this one; Turing’s story is as resonant now as it ever has been. Will Gedling was simply astonishing in the central role; every facet of his genius, his sometimes prickly social persona and his vulnerability were conveyed to us in equal measure. Turing’s immense monologues, chiming with deeply challenging mathematical and intellectual concepts, were delivered in a heartfelt, deeply understanding way – which is no mean feat for a student of Arts and Humanities! – to the point where we no longer felt like we were being treated to a lecture, but that we were simply basking in his boyish enthusiasm and intellectual passion. Yet it was his flaws, his essential innocence and his child-like sense of honesty and need for love which dominated Gedling’s deeply honest portrayal. Turing became a living character whom the audience wanted to protect, to encourage and nurture. The physicality of Gedling’s performance played a central role here, the stammer, the hunched shoulders, the nail-biting and the speed with which he slipped into ‘lecture’ mode all helping to create the illusion that we just might have been witnessing Turing himself speaking to us from beyond the grave. Knowing as we did how tragically it ended for him, the genius of the script still allowed the audience to commit to this time-hopping journey around his life, ideas, relationships and emotional life, supporting him, wishing him well, perhaps even willing for his story to have ended differently, even despite the almost upbeat way in which Whitemore’s work presents Turing’s final act of (apparent) suicide.

The play was not just Gedling’s alone, however. The fabulous supporting cast depicted the mid-twentieth century period and its challenges with such conviction as to fully immerse the audience in the atmosphere of the time. Amy Roscoe, as his mother Sara Turing, was formidable in her portrayal of a character who only belatedly even began to understand her son and who ultimately experienced her own tragedy as a bereaved mother; the scene of confession and ‘coming out’ between mother and son in Act Two was arguably the most moving of the evening, with Roscoe’s revelation of her character’s long unexpressed maternal love heart-rending in its intensity.

Connor Roscoe was strong as Ron Miller, briefly Turing’s lover and ultimately the instrument of his downfall, lending the role a working-class bravado and nonchalance and portraying him as Turing’s opportunistic opposite in some ways, their doomed and very short-lived ‘affair’ poignantly reminding the audience of how far short of his ideals Turing’s search for love so often fell. Roscoe ably conveyed Miller’s murky links to petty crime and his essential cowardice in the face of the law – which nevertheless granted him ‘conditional discharge’- highlighting the vulnerable Turing’s flawed sense of judgement whilst also foregrounding his moral courage and passionate sense of honesty.

Seb Roberts was excellent as Turing’s childhood love, Christopher Morcomb, the reference point and essential memory for all his subsequent adult life, conveying a genuine and sympathetic connection with him, both in his scene early in Act One and in the mimed sequences representing Turing’s inner life and memories which preceded both acts. He also ably doubled-up as the Greek youth Nikos, one of the last of Turing’s unsatisfactory amorous encounters, who almost becomes a re-incarnation of Christopher in their scene together towards the end of the play. Roberts impressively delivered all of Nikos’ lines in word perfect Greek, giving his portrayal of this effusive Mediterranean youth an element of welcome gentle comedy, even as the play progressed to its inevitable, tragic conclusion.

Conveying her own less overt tragedy with considerable skill was Eleanor Connell as cryptanalyst Pat Green, a woman who could be celebrated for being equally intelligent as Turing and yet, following Bletchley and the War, was simply regarded as a housewife. This was a subtle, but significant twist as the audience was encouraged to consider society’s lack of recognition for the female intellect, whilst being acutely aware of the injustices inflicted on Turing himself. Connell perfectly conveyed the character’s intellectual enthusiasm, leaving us in no doubt that her first scene with Turing was absolutely a meeting of minds. Their scene together in Mrs Turing’s garden, was a model of beautifully judged dramatic timing, drawing out all the pathos of Pat’s gently rebuffed declaration of love without a hint of sentimentality.

The patrician, yet engaging Dilwyn Knox of Owen Davitt, completed the Bletchley circle, in an authoritative and entirely convincing portrayal which nevertheless communicated warmth and bluff public school charm, as well as a stoic pathos when facing his own mortality, even while simultaneously voicing society’s conventional judgement on Turing’s sexuality.

Representing the ignorance and bigotry of 1950s Britain, as the intractable Detective Sergeant Mick Ross, was Rhys Millington, whose skill in conveying an air of casual menace with the authority of the law behind him went far beyond the actor’s years. The finely nuanced delivery of his scenes of increasingly menacing interrogation of Turing made him the dominant force in Act One, while his non-committal lack of true empathy in the wake of Turing’s end in Act Two simply added to the audience’s distaste for this instrument of historic social oppression.

Equally convincing was Kyle Robinson’s portrayal of Ross’ superior John Smith, capturing as he did the falsely reassuring air of a figure who we were left in no doubt was still the mouthpiece of the ‘official’ judgement on Turing’s sexuality in the wake of his prosecution, and the supposed security threat it posed.

This was an intimate, in-the-round production, performed on a small temporary stage in the middle of the Main Hall. The fixed set consisted of just a few basic items of scenery, allowing for seamless changes in sound and lighting and for the focus to be on the characters’ interactions with one another across nearly a quarter of a century of Turing’s life. The incidental music, from Ivor Novello’s ‘We’ll gather lilacs’, which formed something of a motif for Turing’s memories of Christopher in Act One, to the use in Act Two of various works by Tchaikovsky, the Russian composer whose life and end oddly paralleled Turing’s in many ways, all served to clarify the emotional temperature of each scene and to provide a further window into Turing’s inner life. This was especially the case with the mimed sequences which preceded each act, beginning with an idealised representation of Turing’s and Christopher’s adolescent friendship  – perhaps closer to what might have been than to actual reality – and accompanied by ‘We’ll gather lilacs’; and followed (before Act Two) with Turing dreaming of being rescued by his Prince (Ron the false one, swiftly replaced by Christopher as the true one) and accompanied by Al Martino’s ‘Here in my Heart’, (incidentally the first ever British Number One in 1951). Gedling, Roberts and Roscoe enacted these additional tableaux with impressive commitment and seriousness, hugely adding to the audience’s appreciation of the poignancy of Turing’s story.

The expertly executed lighting changes from Miss Walmsley and her assistants, along with the similarly smooth scenery changes from Miss Bowker and hers were essential elements in helping to create a seamless dramatic flow to the whole evening.

This should be commended as one of the finest productions of recent years at QEGS and a real showcase of what phenomenal dramatic talent we have here and a measure of just what amazing things our young people can achieve, given the opportunity. All who were privileged enough to witness their work here agreed that they delivered a standard of performance which could easily grace the professional theatre.

A bold statement, then, delivered with utter professionalism and a deep respect and reverence for the work and its subject matter, this was more than just the story of an intellectual; it was the compelling story of a man striving to be true to himself. 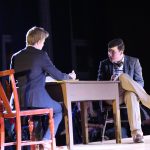 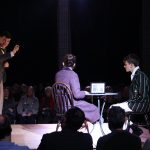 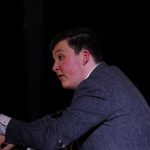 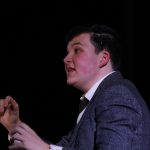 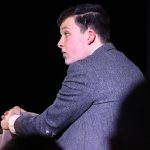 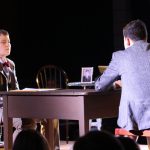 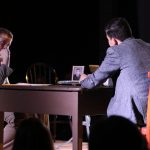 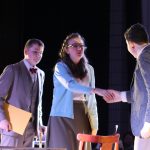 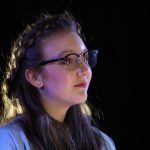 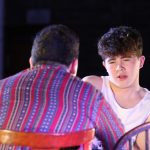 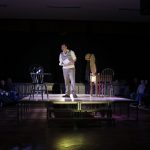 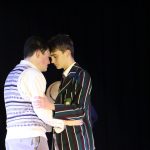 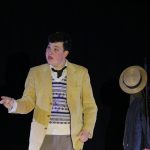 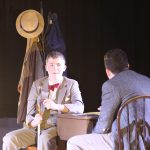 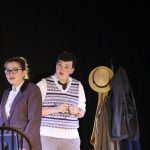 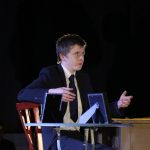 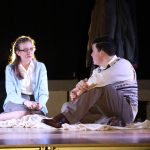 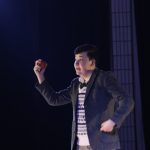 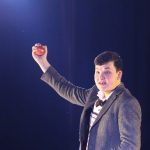