On Thursday 19th May 2022 some of our Sixth Form students accompanied Mr Vyse and attended the Annual Mayor Making Ceremony, held in the Council Chamber at Blackburn Town Hall.

Parents and Mayor and Mayoress of Blackburn with Darwen, Mr and Mrs Hardman handed over the chains of office to the new incumbent, Councillor Suleman Khonat.

Councillor Khonat will serve as Mayor of Blackburn with Darwen for 2022/23. He advised that he planned to use his Mayoral year meeting people across our diverse communities and encouraging everyone to help make the borough a better place.

He added: I speak many languages, so I will be connecting with all communities to engage them and encourage them to get involved and make a positive difference in BwD.

It was a lovely event and lots of thanks and gratitude was offered to the Hardman Family for their service to the borough throughout their tenure. 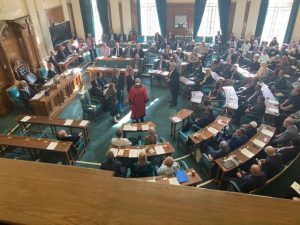